Summermusic #2: Ode to an Earworm

When you see Saturday night's concert of MSC's Summermusic 2022 at St. Michael Lutheran Church on State Street is called “ODE TO AN EARWORM” and features Tabea Debus, recorder, and Paul Holmes Morton, theorbo & guitar, a few questions might run through your mind.

“Isn't a recorder one of those things I was subjected to in elementary school?”

“I know what a guitar is, but what's a theorbo?”

Not to mention, “How can you build an entire program around something like the theme from 'Gilligan's Island'?”

Just like the piano lessons many of us may have taken when our legs couldn't quite reach the pedals, the recorder was something music teachers used to introduce many of their students to the basics of making music. It was more accessible and less complicated than a piano and it was cheaper, easier to obtain results, and far more merciful (at least to the parents) than a violin.

And just as there's a long way between “Chopsticks” and Rachmaninoff's 3rd Piano Concerto, there's also a long way between toddlers toodling on a plastic recorder and a concert artist like Tabea Debus playing an instrument that was the predecessor of the flute before the early-18th Century.

Here she is, playing two short selections: the first one is a fantasy by Baroque composer Georg Phillip Telemann and a more modern work from 2017 by British composer Dani Howard called “2½ Minutes to Midnight.”

Going back to the 14th Century (if not before), the recorder (generically) was the standard instrument before the modern flute came along and began replacing it in the early-1700s, analogous to earlier stringed instruments, the viols, being replaced by modern violins around the same time. Since recorders were also called “flutes,” the confusion between the old and the new meant the modern flute was called the transverse flute.

(We don't need to get into that in any more detail, here – that and how the different recorders were voiced, like singers, as soprano/alto/tenor/bass and how they were pitched in different keys, like clarinets and saxophones, because then I should also try to explain the “tablature notation” used by lute players in the Renaissance and nobody in their right minds wants to go there...)

Which brings me to the guitar and its family of instruments. Here, it's often a national identity: yes, the guitar is the most familiar of these plucked-string instruments, but there are also banjos, vihuelas, ukeleles, balalaikas, and, neither least nor last, the lutes, among numerous others. Essentially, the guitar instruments originally were the popular music's instrument, and the lute, starting even before the 11th Century troubadours and going through the Baroque.

Which brings me finally to, specifically, the theorbo. 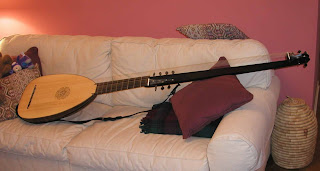 Basically, it's a bass lute that was primarily used in the Baroque era to play the “continuo,” that curious combination of (usually) harpsichord and cello playing the harmony in an ensemble with the cello emphasizing the bass-line of the chords. The idea was “one instrument to play harmony (chords), usually a keyboard, plus one melodic instrument (like cello, bass, or bassoon) to play the bass-line.” But guitars and lutes can play chords, too, and depending on the situation, a composer wouldn't specify which instruments were to play the part: in a church, they'd use an organ; depending on the acoustics, they might prefer a bass viol (string bass) or bassoon. In an opera, it wasn't unusual to have several different instruments to be used in different combinations to create a variety of sounds.

All that aside, here's Paul Morton playing a theorbo in a dance by French baroque composer Charles Hurel which is on Saturday night's program: If you're wondering if he has a bionic arm extension to play to the end of that fingerboard, you'll need to come to the concert and see for yourself. (I imagine the first several lessons on the theorbo are about how to carry it without knocking everybody over...)

Usually when I write posts for the blog, I take you “behind-the-scenes” with the music and how the works fit into the composers' lives and they times they lived in – and with any luck what connections might be made between them. In this case, that's not going to be very helpful, being a “concept” program in which the connections are in the selections and the individual biographies are less significant.

Given that, there's no point my reinventing the worm so I will quote from Tabea Debus' program notes as she delves into what was in her mind when she created this program.

Ohrwurm
Ohrwurm explores how tunes and dances wormed their way into
many aspects of music-making in 17th and 18th century Europe –
and, in traversing the centuries, contemporary compositions testify
to the earworm’s secured place in modern life.

Writing in 1668, Samuel Pepys describes something that we all know too well, the tendency for music to “get stuck” in our minds: “I was unable to think of anything, but remained all night transported, so as I could not believe that ever any musick hath that real command over the soul of a man as this did upon me.”

Such tunes, so-called “earworms,” are known to most of us. They go round and round in our heads; sometimes we can literally feel them burrowing deeper and deeper as if our minds were made of soil. And while this might suggest some sort of transhistorical closeness to Pepys, the concept of earworms can perhaps freshly illuminate our understanding of music publishing, memory and repetitive musical structures in a historical period far from our own.

In other words, what are the traces of earworms in musical practices? This programme explores how tunes and dances wormed their way into many aspects of music-making in seventeenth and eighteenth century Europe.

Music manuscripts from the seventeenth century suggest that regular exposure to songs and dances made some of them “stick.” Perhaps it was not only the minds of listeners in which music got stuck, but also their dancing limbs. In the absence of sung text, the repetition of an ostinato bass line, harmonic progression or melodic pattern in works such as the Ciaconna, the Spagnoletta or Diego Ortiz’s Recercadas sobre tenores Italianos imbued music with a mesmerizing rhythmic quality that almost seemed to possess the bodies of performers and listeners.

This is still apparent even when a composition is only loosely based on a dance, a fusion of different styles, or deviates from the original steps. For instance, in his La suave melodia, y su Corrente, the maestro di cappella in Naples Andrea Falconieri turns a “sweet” air into a dance whilst keeping melody and harmony unchanged. In La Monarcha a change of character is brought about by a shift in 16 pulse. Falconieri’s tunes are paired with works for solo theorbo by his contemporary Giovanni Girolamo Kapsberger, an ambassador of virtuosic music for plucked instruments.

In some cases, it was the combination of melody and text that caused music to stick in minds. Songs resurface throughout Renaissance music compilations with adapted or translated texts, as well as lines of added ornamentation. This layering seems to attest to a repurposing of the earworm through time that made simple tunes both ‘stretch further’ as well as embed themselves deeper into the cultural memory. La Monica (or Une jeune fillette) was one such tune, popular throughout Italy, France, Germany and England from the sixteenth until the eighteenth century. The song inspired variations by many prolific European composers, including Philipp Böddecker, William Byrd, Eustache de Caurroy, Bernardo Storace and Francesco Turini, whose diminutions are featured in this version for recorder and basso continuo. John Dowland’s Lachrimae pavane was (and still is) known around the globe – a fact proven by this beautifully embellished version by German composer and violinist Johann Schop. It was published first as an instrumental pavan, and later as the lute song Flow my tears in Dowland’s "Second Book of Songs and Ayres" (1600).

Music publications in general provide many leads when reconstructing earworms from the past. In A Musicall Banquet complied by Robert Dowland in 1610, he records a ‘varietie of delicious ayres’ from England, France, Italy and Spain, such as Vuestros ojos tienen d’amor (‘Your eyes hold I know not what of Love’). A Musicall Banquet also includes songs by the compiler’s father, John Dowland. Can she excuse my wrongs from his "First Book of Songs and Ayres" (1597) conveys the fluid transformation of madrigal consort pieces into lute songs; indeed, it was published in both forms. Not ten years later, Dowland re-published the song in Lachrimae, or Seven Tears as Earl of Essex Galliard for five-part viol consort and lute.

Other composers and publishers also sought to preserve specific tunes beyond that evening’s performance, and frequently cashed in on their preservation. Amongst these tunes are Greensleeves, allegedly composed by King Henry VIII and the basis of many sets of diminutions for varying instruments, and some of Henry Purcell’s most loved songs such as Fairest Isle from King Arthur to a text by John Dryden.

Naturally musical earworms of the past and present mirror the listeners’ and performers’ tastes and preferences – which is why this program features several personal favorites of the two performers. The name Johann Sebastian Bach will inevitably come up when sharing earworms, and his French Suites seem to have followed Bach throughout his own career, as he reworked them time after time for his teaching purposes. In juxtaposition with ‘true’ French Baroque music of Parisian origin by lutenist Charles Hurel it becomes audible how Bach fused French stylistic influences with his very own compositional language.

In traversing the centuries, one might think that we have little in common with these brain-burrowing tunes and the modes and methods in keeping them alive. But Gareth Moorcraft’s Diaries of the Early Worm testifies to the earworm’s secured place in modern life. Based on fragments from medieval Troubadour songs, the piece takes us on a humorous journey from the early stages of an earworm, charting its increasing intrusiveness and finally our liberation from it.

And my work here is done. Enjoy the concert!

Posted by Dick Strawser at 7:05 PM