Kristóf Baráti will be playing a Stradivarius violin made in 1703, known as the “Lady Harmsworth,” when he performs at Temple Ohev Sholom tonight at Market Square Concerts' first program of the new year. Last season, violinist Ray Chen played the 1702 Strad known as the “Lord Newlands,” so Harrisburg, as off the beaten path as we might be, is getting to hear some pretty amazing instruments – as well as some amazing musicians.

And Kristóf Baráti will be making his official Carnegie Hall debut on January 21st. This is his first tour of the United States – earlier concerts took him to Boston and Washington D.C. before arriving in Harrisburg – and though he may not be a familiar name to American concertgoers, several performers I know have been spreading the word.

= = = = = = =
“...Béla Bartók’s Sonata for solo violin... opens with a chaconne[-]like movement — and Baráti turned in a reading that was almost painful in its intensity of feeling. The work pushes the violin to the limits with a wildly inventive palette of sounds, and its often wrenching emotional landscape (it was written in 1944) make it a work not for the faint of heart. But Baráti played it with such insight and understanding that the audience erupted in a sustained standing ovation at the end, bringing him back for an encore, Paganini’s Caprice No. 1.”
= = = = = = =

Baráti may be too young yet to be called a “violinist's violinist,” but you'll understand this once you hear his impeccable intonation and the flawless technique behind seemingly effortless performances. There are few violinists performing today who can just stand there and play without the physically distracting over-emoting that too many music lovers assume to be the necessary norm. If a performer's job is to make it look easy, he makes it look so effortlessly easy!

His program in these concerts consists of three different composers – two of the six solo sonatas by Belgian violinist and composer, Eugene Ysaÿe; the Partita in D Minor by Bach; and the Sonata for Solo Violin that was one of the last completed works by Bela Bartók. Both Ysaÿe and Bartók in the first half of the 20th Century were specifically inspired by Bach's works from the early 18th Century, and such a program, if not daunting enough to a performer, is a collection of some of the greatest challenges possible for a violinist – and, at that, a lone violinist.

Here is Kristóf Baráti playing the D Minor Partita of Johann Sebastian Bach, recorded at the Moscow Conservatory in January of 2008, on a program of all six sonatas and partitas:


As Johannes Brahms wrote to Clara Schumann about the Chaconne (which he arranged for piano, left hand only): “On one stave, for a small instrument, the man writes a whole world of the deepest thoughts and most powerful feelings. If I imagined that I could have created, even conceived the piece, I am quite certain that the excess of excitement and earth-shattering experience would have driven me out of my mind.”

Belgian violinist Eugene Ysaÿe composed his six sonatas for solo violin in 1920 and dedicated each one to a different colleague. In this program, Barati plays the 2nd and 3rd Sonatas, dedicated to Jacques Thibaud and fellow-composer Georges Enescu respectively. Like Bach, Ysaÿe created in these six works a compendium of violin technique for his own era.

(These video clips on YouTube did not permit embedding the file, here, so my apologies for including only the links...) 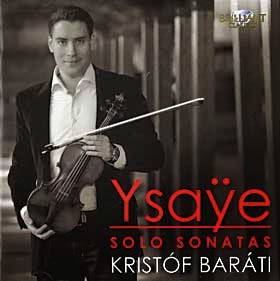 = = = = = = =
"Kristóf Baráti is recorded with exemplary presence in a seductively enveloping acoustic – it feels as though the young Hungarian violinist is standing in the room with you, and the range of dynamics and articulation he encompasses is remarkable. Tapping into his instrument’s natural resonances, cleanly defined by exceptionally strong finger-falls (with occasional fingerboard resonance), the gives the effect of a pure, open sound being gently coaxed and cajoled rather than forced out of the instrument. Little wonder, then, that his mentor Eduard Wulfson is a former pupil of both Nathan Milstein and Henryk Szeryng.

Baráti’s dazzling range of bow strokes and ear-ringing intonation combine throughout to create the impression of technical challenges arising directly out of the music’s expressive core rather than mere hurdles to be overcome. In the opening ‘Obsession’ of the Second Sonata he employs an exciting slight kick to his staccatos and multiple-stopping reminiscent of the young Shlomo Mintz. But what makes this a truly exceptional disc is Baráti’s interpretative vision – movements that in even the most skilled of hands often sound expressively one-dimensional here emerge as deeply compelling emotional narratives. He even makes the moto perpetuo semiquavers that crown the ‘Fritz Kreisler’ Sonata no.4 dance free of musical gravity, with an enchanting sense of every note floating on air. A highly distinguished release."
= = = = = = =

That said, this next video clip is not the best recording – made in a small gallery space and simply recorded – and it has the challenges many live performances may have (at one point, somebody manages to knock over something with considerable but unruffling clatter) yet it will give you more than an idea what to expect when Barati performs the brief 3rd Sonata which Ysaÿe dedicated to Enescu.

Unlike Bach and Ysaÿe, Bela Bartók was not a violinist but he was inspired by hearing Yehudi Menuhin playing Bach and was commissioned to write this sonata for Menuhin. Bartók was living in the United States during the War and completed this in 1944 while he was undergoing treatment for what had not yet been diagnosed as leukemia. This sonata is technically his last completed work – he continued working on the 3rd Piano Concerto, a surprise for his wife (only the last few measures remained to be orchestrated). while sketching the new Viola Concerto but officially finished neither work.

Like the Bach Sonatas which included a second-movement fugue, Bartók writes a fearsome fugue preceded by a chaconne-like movement based on something like a Hungarian folk-song (much of Bartók's thematic material is based on folk song, real or “imaginary”).


So, given you've had a chance to hear – and in some cases, see – these recordings of Kristóf Baráti playing everything on tonight's Market Square Concerts' program, why would you not want to go hear him live?

The performance is at Temple Ohev Sholom at 2345 N. Front Street – plenty of free parking and presumably the weather should hold out (not too cold and the snow looks like it'll hold off till the next day).

And what will Baráti be doing the day after he's performed here in Harrisburg?

Finding out just how much practice it takes to get to Carnegie Hall!
Posted by Dick Strawser at 10:22 AM 2 comments: