Let's try this and see if it works (I'm such a Luddite, anyway).

If you attended the Parker Quartet's concert that opened Market Square Concerts 2009-2010 Season, let us know what you thought by filling out this brief survey:

Thanks!
Dr. Dick
Posted by Dick Strawser at 3:00 PM No comments:

The Parker Quartet will perform at the first concert of the season with Market Square Concerts on Sunday, October 11th at 4pm at Whitaker Center. Their program includes Beethoven's Quartet in D Major, Op. 18 No. 3 and the quartet Mendelssohn wrote several months after Beethoven's death, his Quartet in A Minor, Op. 13. I'd written about both of these works in the previous post. This post is about another first quartet on the program, Bela Bartók's String Quartet No. 1 in A Minor, Op. 7.
- - - - - - - 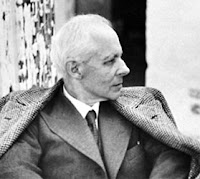 Regarded as one of the greatest composers of the 20th Century, Bela Bartók's first published quartet is nominally in A Minor. That doesn't mean it sounds like it's the A Minor you might be familiar with from Mendelssohn's quartet on the second half of the program or even the famous opening of Wagner's “Tristan und Isolde.” By 1900, the idea of what keys you could move to within a piece – the home or central tonality that makes it a Something in A Minor – was very different from the choices composers had in 1700 or even 1800. All of this weakened the hold of the "central tonality" as a structural force in the music. Mozart, in his Symphony No. 40 in G Minor, written in 1788, moved so quickly through so many possibilities at one point in the finale, listeners then must have become dizzy because they had no idea what “key” they were in, everything whizzing by so fast. In fact, some writers in the 20th Century pointed to this as an early example of “atonality.”

It's not that the music was becoming more dissonant: it's that the harmonic dissonance, increasing the tension between the chords, was beginning to fracture the confidence a listener might have knowing what key-center or tonality the music was in at any given moment.

While most concertgoers would be more familiar with Bartók's 3rd, 4th & 5th Quartets, the first of the six may come as a surprise, but I guess you could say the same to someone who'd only ever heard Beethoven's Late Quartets and had never, somehow, managed to hear any of the Op. 18 Quartets. What a difference twenty years can make!

Bartók (seen here in a photograph taken in 1903) was 27 when he composed his first string quartet, writing most of it in 1908 (he finished it in January the next year). At the same time, Schoenberg was working on his 2nd Quartet, the one with the soprano in the final two movements, the last of which is famous for being the first “atonal” composition, more or less. (I blogged about this work for this summer's Gretna Music performance by the Momenta Quartet.)

Schoenberg's 1st Quartet had been premiered in 1907 in Vienna, though I doubt Bartók would've had a chance to hear it by the following year. Even if they don't sound very much alike, they share a common sense regarding disintegrating tonality and interestingly also a tie with the past for all their looking into the future, wondering where the tonality of Beethoven, Brahms, Wagner and Mahler was headed in the first decade of the 20th Century.

A little later, I'll mention another influence on the sound of the opening of Bartók's quartet.

You can listen to a young quartet playing the first movement of Bartók's String Quartet No. 1 in A Minor, Op. 7, in this YouTube video. I don't know the name of the quartet or if they're students or a professional group, but it's a very solid performance. The musicians credited are Audrey Wright & Alanna Tonetti-Tieppo violinists; violist Jim Larson and cellist Ji-Eun Lee.
- - - - - - -

Bartók probably didn't know much about Schoenberg's music in Vienna. I suspect he might have known “Transfigured Night” written in 1899 with the score published in 1904 (you can hear a section of that string sextet here, in this YouTube Video – and here you can listen to Schoenberg's 1st String Quartet (also his Op. 7) at the Schoenberg Jukebox!).

But he did find out what Debussy had been doing in Paris. His friend and fellow-composer Zoltan Kodály had just returned from a trip to France with several scores of Debussy's works. (You can hear the influence of Debussy beginning at 6:00 into the clip). It's such a sudden change from the rest of the movement, it almost sounds like Kodály dropped by with a score of Debussy's Quartet the day Bartók was composing this passage... (Here's a link to a video of the Cypress Quartet playing the opening of the Debussy String Quartet which they will play for Market Square Concerts in January.)

There was one more discovery from the year 1908, though you won't hear it in the 1st movement (and I couldn't find a clip of the 3rd movement, so you'll have to come to the concert to hear it). In 1904, he was at a summer resort and heard a teen-aged peasant girl from the nearby rural area singing folk-songs unlike anything he'd heard before. But it wasn't until 1908 when Kodály, who had already started studying the folk music of Hungary, introduced his collection to Bartók. This then began his systematic study of not only Hungarian folk music but also a great deal of folk music from across Eastern Europe and northern Africa.

In Europe, Hungarian music really meant “Gypsy Music.” This was what Franz Liszt, born in Hungary but cosmopolitan by nature, introduced to the world in his Hungarian Rhapsodies and what the very German Brahms incorporated into his Hungarian Dances and the dance-like finales of works like the 1st Piano Quartet or the Violin Concerto. He'd heard this music as a young man, accompanying a Hungarian violinist named Eduard Reményi. 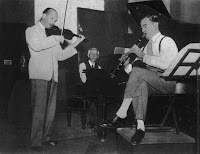 Basically, this was the urban pop music of the day and, like jazz fans in New York City in the Roaring Twenties, people in Vienna went to smoky taverns to hear gypsy bands play the night away (the good Dr. Brahms had his favorite haunts with bands he followed like any jazz fan). (Speaking of which, the photo, left, was taken during a rehearsal of Bartok's "Contrasts," written for clarinetist Benny Goodman.)

Bartók first incorporated some of this real folk-song style in the last movement of 1st String Quartet, writing several piano pieces based on it that year as well. The photograph of Bartók (below) was taken in 1908, in fact, as he recorded Czech peasants in rural Bohemia singing into an Edison recording machine! Later, the common structure of much of this folk music would inspire him to create a harmonic and melodic vocabulary unlike standard classical tonality. When he used this in his own original works, he referred to it as his “imaginary folk-music.” 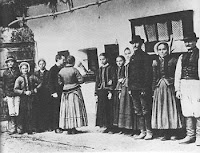 I couldn't find anything that wasn't overly arranged (either too New Agey or just rocking out in a pop-rock style), but here's an example of a quiet love song that will give you an idea. (If you ever get a chance to hear one of those Nonesuch “Explorer” recordings (many of them have been transferred to CD), you're in for a definite ear-opener!)

There was one other event in Bartók's life at this time.

In 1907, he had fallen in love with a violinist named Stefi Geyer (this photograph of her is dated 1905: she would have been about 17, then). Apparently it was mostly a one-sided relationship, whether completely unrequited or not. Being a composer, naturally Bartók wrote her a violin concerto but when she broke off the relationship the following year, he suppressed the work which was not published until after they had both died. However, after they'd broken up, he did use the first movement as the first of Two Portraits, re-naming it “Ideal,” even three years later adding a dissonant, ironic second portrait labeled “Grotesque.” He uses a sonority of a minor chord with a major 7th superimposed on it – F#-A-C#-E# which he referred to as his “Stefi Chord.”

Emotionally, he was strongly affected by this rejection and his friends worried about the state of his health. After he'd begun work on a new string quartet, he wrote to her that it opened with what he called “my funeral dirge.” If this event signaled the end of one aspect of his life – before the year was out, he married one of his piano students, apparently on the rebound: it was not to be a happy relationship – the quartet ends with another sound that would become his future voice, its inspiration found in the folk songs of his ethnic heritage, something only recently discovered within him, resonating in his innermost soul, and which would form the foundation of his mature musical voice.

In 1984, Hungarian conductor Zoltan Rosznyai was the guest conductor for a Harrisburg Symphony concert that featured concertmaster Julie Rosenfeld of the Colorado Quartet, then in residence with the orchestra, playing the Two Portraits. I remember Rosznyai explaining to the orchestra how he'd known the Geyer family and had met Stefi Geyer late in her life at a sanatorium in Switzerland where she'd spent most of her life.

As I recall Rosznyai's explanation, Bartók was just too unpredictable for her and presumably not regarded as a good match by her father. She was also only 19 at the time; Bartók, recently appointed a junior teacher at the Budapest Conservatory, was 27. Not long afterward, she married a Viennese lawyer, presumably a more stable personality and a more securely established professional. After he died during the Flu Epidemic of 1918, she married composer Walter Schulthess and moved to Zurich where she taught and performed. She died there in 1956.

The violin concerto Bartók had composed for her wasn't discovered until after she died, and first heard in 1958. The famous and rather large-scale concerto Bartók wrote in 1937 now had to be re-christened the Violin Concerto No. 2 to make room for this slighter, less mature early work inspired by unrequited love. Its aftermath became the starting point for the first of his six string quartets, a collection regarded as monumental to the 20th Century as Beethoven's were to the 19th.