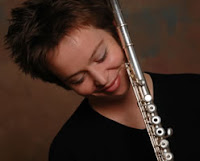 Ellen Hughes, Director of Market Square Concerts, writes about the next program in the series this Wednesday, March 24th at 8pm at Whitaker Center, "One of the first things I did when I began my involvement with Market Square Concerts was to attend the finals of the Concert Artists Guild Competition in New York in October, 2008. Claire Chase was among those finalists, and when I heard her perform with pianist Jacob Greenberg, I knew I wanted to bring them to Harrisburg this season.

"She went on to win First Prize in the competition. I loved the way she played, her communicative style with both the audience and her accompanist, her confidence and comfort with her instrument. She's a breath of fresh air. Her program is mostly traditional, but you will hear some new sounds too, and if you are able to come to this concert I believe you will never think of flute music in the same way again."

I was thinking the program would fit into the category of "Something Old, Something New, Something Borrowed..." (except I can't find anything particularly blue...). It includes Bach's Flute Sonata in E (BWV.1035), two of Debussy's Chansons de Bilitis and a Suite of Hungarian Peasant-Songs by Bela Bartok; the newer works would be the 1947 Sonatine by Pierre Boulez and a short work by Franco Donatoni called "Filli."

The "borrowed" part would be transcriptions of two works you don't normally find on flute recitals: the 24th Caprice by Nicolo Paganini (one of the great show-cases for solo violin) and Bach's Toccata and Fugue in D Minor (famous as an organ war-horse but perhaps originally for solo violin, but here arranged for not just a solo flute, but an amplified solo flute).

A reminder that tickets are $28 and available at the door or in advance at the Whitaker box office,in person or by calling 214-ARTS.

We also offer $5 tickets for college/university students. School-age students are free; you can get those tickets also in the ground floor lobby before the concert.

If you are able and interested, please come to the "Soundscape" educational outreach program designed for school students at 1pm and also at Whitaker Center. This free program will provide you with an introduction to that night's program.

And at 2:30 that afternoon, WITF-FM (89.5) will broadcast an interview with Claire Chase and pianist Jacob Greenberg; they'll be playing excerpts of some of the music on their recital that evening.

Confit French Bistro has offered to provide samples of their French Country Cuisine in the lobby of Whitaker Center before the concert, so you might want to arrive a few minutes early!

Hope to see you there!