The Bach Choir of Bethlehem in Harrisburg

This weekend, one of the great choirs in America comes to Harrisburg. The Bach Choir of Bethlehem – not so far away, after all – may be the “oldest Bach choir in America,” founded 113 years ago and internationally renowned for their performances and recordings of Bach’s works, they also perform music by other composers on their programs: in addition to one of Bach’s great motets, “Singet dem Herrn,” their Market Square Concerts program includes Leonard Bernstein’s “Chichester Psalms” and Benjamin Britten’s “Rejoice in the Lamb” as well as a new work by a composer whose name doesn’t begin with a B – Stephen Paulus, who wrote “A Dream of Time” as a commission for the choir’s celebration of conductor Greg Funfgeld’s 25th year as its artistic director and conductor. 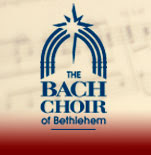 The performance is at Market Square Church in downtown Harrisburg at 8:00 and there’s a special pre-concert talk given by conductor Greg Funfgeld beginning at 7:00, which is free to ticket-holders.

The program is entitled Songs of Hope – “From the Psalms of David to 18th century poetry by Christopher Smart written in an English lunatic asylum, and 20th century poetry by Carl Sandburg written in depression-era Chicago, the texts of our ‘Songs of Hope’ are moving affirmations of hope in the face of adversity” – appropriate given the current world news with the political unrest in the Middle East, the devastation in Japan following the recent earthquake there last week and our own concerns about extreme weather and the economy – and their performance here is in preparation for their newest CD which they’ll begin recording the following week.

Several people have told me they plan on going to the pre-concert talk just to get a good seat for the 8:00 performance. There’s been quite a buzz about the choir’s appearance here in the mid-state, so the attendance is expected to be very good.

The choir has its own blog and you can read more about their spring concerts here - with links to each work on the program – about the Bach motet, Britten’s cantata, “Rejoice in the Lamb,” Bernstein’s “Chichester Psalms,” and the new work by Stephen Paulus, setting words of Carl Sandburg, “A Dream of Time.”

Joining the 60-voice choir will be the 8-member chamber orchestra, the Virtuosi of the Bach Festival Orchestra, as well as vocal soloists Rosa Lamoreaux (soprano), Daniel Taylor (countertenor), Benjamin Butterfield (tenor) and William Sharp (baritone), familiar names from previous performances and recordings made by the Bach Choir.

Conductor Greg Funfgeld talks about their spring program – this one specifically for their concert in Bethlehem the day after their performance with Market Square Concerts in Harrisburg.
- - - - -

Here is a video by another famous American choir of another work by Stephen Paulus – his “Pilgrim’s Hymn” performed by the Mormon Tabernacle Choir:

Update: this is annoying - the video embed code from their website doesn't always seem to work in here, so here's a link to their page, instead. It's a beautiful piece, so please check it out!
- - - - - 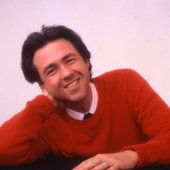 While for me it’s always a thrill to hear great music well performed, there is a personal connection here I am also looking forward to. William Sharp who frequently appears as a soloist with the Bach Choir and has recorded and performed around the country, in addition to teaching at Peabody Institute in Baltimore, was a grad student at the Eastman School of Music my last year there (his wife and I were among those struggling through their doctoral defenses at the same time). It was during a brief time when the great bass, Hans Hotter, best known for his Wagnerian roles and performances of Schubert songs, was in residency there – perhaps for a week. In addition to performing Schubert’s Winterreise, he gave daily master classes (which I think were primarily about Schubert songs) for the school's voice students.

While he worked with all of the students who performed for him, Hotter took an especial interest in Bill, hearing him every day to the point Bill was often preparing new repertoire for the next day's class, even (if I recall) sight-reading when Hotter wanted to hear more. Basically, it amounted to "public" lessons with one of the greatest singers in the world, invaluable experience, no doubt, but also a chance for those of us who sat in on the classes to hear Bill sing and, even in that short time, develop as a sensitive and intuitive performer.

So there’s a certain amount of “I-knew-him-when” pride every time I’d hear a new CD of Bill’s – beginning with the “AIDS Quilt Songbook” or any of the Bach Choir of Bethlehem recordings – and now, another chance to hear him live.
- - - - -

This program with Market Square Concerts and the Bach Choir of Bethlehem is partially supported by a grant from Pennsylvania Performing Arts on Tour, a program developed and funded by The Heinz Endowments; the William Penn Foundation; the Pennsylvania Council on the Arts, a state agency; and The Pew Charitable Trusts; and administered by Mid Atlantic Arts Foundation. Season sponsor: Capital BlueCross. Market Square Concerts is a resident company of Whitaker Center for Science and the Arts. Support is also received from the Cultural Enrichment Fund and the Pennsylvania Council on the Arts.
- - - - -
photo credit: header photo by Paul Pearson, from the Bach Choir's blog; photo of William Sharp from his biography page at Peabody Institute of Johns Hopkins University, Baltimore.
Posted by Dick Strawser at 12:38 PM No comments: