The St. Lawrence Quartet with Mozart, Mendelssohn and John Adams

Can you guess which composer this critic is talking about?

"[This composer's] works do not in general please quite so much as [those by someone else]... [These works] confirm... he has a decided leaning towards the difficult and the unusual. But then, what great and elevated ideas he has too, testifying to a bold spirit!"

If this composer "leans toward the difficult and the unusual," your first reaction is probably some highly intellectual "contemporary" or at least early 20th Century composer like Schoenberg.

Actually, it's from an anonymous London critic writing in 1789 about Mozart's new set of six string quartets, dedicated to Haydn.

(Incidentally, when a Viennese publisher sent them to Italy for publication there, the copies were sent back because "the engraving is full of mistakes.")

The second of these quartets, the one in D Minor, K.421, opens Market Square Concert's program this week with the St. Lawrence Quartet.

(Oh, and the "someone else" whose quartets were more pleasing? Those by Leopold Kozeluch. When was the last time you ever heard a quartet by Kozeluch in a concert? Or, for that matter, any of his 33 symphonies or 22 piano concertos? Just sayin'...)

Also on the program is the first published quartet by Felix Mendelssohn and a more recent work composed especially for the St. Lawrence by one of America's leading composers today, John Adams, which they premiered in 2009.

Following that premiere, Allen Kozinn of the New York Times wrote that it was a “stylistically fluid extended fantasy, with the players moving seamlessly through a colorful sequence of episodes.”

This concert takes place at Temple Ohev Sholom in uptown Harrisburg, Thursday evening at 8:00. The temple is located at 2345 N. Front St., Harrisburg, and there is plenty of parking available.

(Now, all we have to do is pray for good weather!) 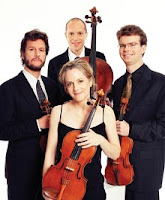 The St. Lawrence String Quartet, one of the best known quartets from Canada, was founded over 20 years ago, and has long established itself among the world-class chamber ensembles of our generation.

Alex Ross of The New Yorker magazine writes, “The St. Lawrence are remarkable not simply for the quality of their music making, exalted as it is, but for the joy they take in the act of connection.”

They are Ensemble-in-Residence at Stanford University and all live in the San Francisco area. They have a busy touring and festival schedule, and we are fortunate that they are able to return to Harrisburg for another concert this season.

Tickets are $30, $25 seniors, $5 college/university students. School-age students are free. Tickets are available at 717 214-ARTS or at the door.

Mozart wrote his "Haydn Quartets" – or less confusingly, the "Six Quartets Dedicated to Haydn" – between 1782 and 1785. Unlike many of his works which seemed to be written down in rough draft already complete and finished (complete as in already fully conceived; finished as in not needing any revisions to reach their final form), the sketches for these quartets show a long and (for Mozart) laborious process of trials and corrections.

The story goes that Mozart was so intrigued by what Haydn was doing in the String Quartet Medium with his latest published set – the six quartets, Op. 33 – which came out the year Mozart arrived in Vienna at the age of 25.

Also unusual for Mozart, who seems to have sprung Minerva-like fully formed without formal training, was this need to "study" someone else's music. So taking Haydn's music and studying it to "learn the art of quartet writing" might seem odd, in hindsight. Mozart had written quartets before and could no doubt have continued writing quartets as easily as he wrote symphonies, concertos and operas without "studying" anyone else's music to find out how to improve his craft.

However, that deference may also be a mark of maturity. Haydn, then over twice Mozart's age, after all, was the avowed "Great Composer" of the day – not just a popular one, like Kozeluch. Whatever Mozart was looking for when he arrived in Vienna – primarily, to make a living as a free-lancer rather than be stifled as a court musician in provincial Salzburg – he also realized he could benefit from learning what Haydn (himself, largely untaught) had already accomplished.

It's no small statement to say Mozart's six "Haydn" Quartets are among the finest of the 18th Century – even if they made difficult listening for some people more attuned to works by Kozeluch and other, equally forgotten but once popular composers.

Both learning and a sense of homage are behind Mendelssohn's first published quartet, as well. Beethoven's last quartets were still new – in fact, so new, if it's true that the opening of the A Minor Quartet was inspired by Beethoven's Op. 135, the "Muss es sein? Es muss sein! (Must it be? It must be!)" statement that opens the last movement, Mendelssohn studied the score even before it had been given its world premiere performance! It was written as a direct response to the news that Beethoven had died on March 27th, 1827.

While his next quartet – the one in E-flat Major – may show less direct influence from Beethoven, Mendelssohn began this quartet at home in Berlin in 1829 but completed it in London in September while on the tour that was the inspiration for what became the "Hebrides Overture (Fingals' Cave)" and the "Scottish" Symphony.

Because the publishing of music does not always reflect the chronology of its composition, I need to explain that the 1st String Quartet was written two years after the 2nd String Quartet which in fact were both published before two works he'd composed a few years earlier.

There is also a String Quartet in E-flat Major that he composed when he was 14 but it wasn't published until over 30 years after his death. Like the early string symphonies, it's regarded as a "student work" and was never given an opus number and is generally listed as "Quartet in E-flat (1823)" to distinguish it from the two quartets in the same key he did publish (No. 1 and No. 5). 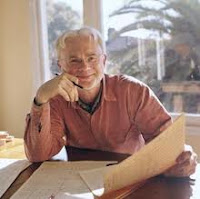 John Adams is regarded as one of the most important composers writing today. (He turns 64 next Tuesday, by the way). While his musical style is rooted in the "minimalism" of the 1970s and '80s, it's not a fair description of his music, just as not all of Debussy's music is "impressionistic" and Debussy and Ravel are no more identical for being branded "impressionists" than Philip Glass, Steve Reich and John Adams are identical for being branded "minimalists." Yet it's convenient and it won't go away.

As a medium, the string quartet comes with considerable historical baggage – the repertoire of Mozart, Haydn, Beethoven, Brahms, Bartok and Shostakovich being not just the greatest of the quartets but some of the greatest music ever composed.

This is not the first time Adams has composed a work for string quartet but it's the first time he's called it simply that – no fanciful title, just an abstract indication of a willingness to face up to this historic legacy.

It's essentially a two-movement work, though the first movement encompasses both the standard opening, more intellectual argument of a sonata movement and a contrasting slow movement.
The String Quartet was commissioned jointly by the Juilliard School for its Focus Festival and by Stanford University's "Lively Arts" and the Banff Center, written for the St. Lawrence Quartet who premiered it at Juilliard in January, 2009.

It was not an arbitrary pairing of composer and performer. Like many composers, he was inspired by hearing his performers playing something that so impressed him, he was suddenly taken by the idea of writing for them.

From an interview on NPR:

'When he heard them play, Adams said he was reminded of how much the sound of the string quartet is like "elevated human discourse ... like speech brought to the highest, most sublime level."

'Adams, like many composers before him, was hesitant to write a string quartet. But after he saw the St. Lawrence Quartet play Beethoven, he turned into what Nuttall describes as a "kid in a candy shop." All kinds of possibilities were suddenly open, and he began writing.'

Here are comments from reviews of the premiere: 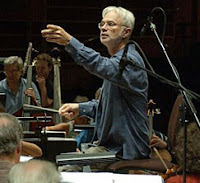 “Like a perpetuum mobile, motion sweeps through the parts: it hums and purrs on the stage. The Canadians play the work as a scherzo with few points of repose. Electrified, like music which is in a constant current. The lively, rhythmically-charged, wild style of playing suits the 20-year-old ensemble, for which Adams has written the perfect work.” Ruhr Nachrichten

“A stunner…the piece boasts all the attributes audiences have come to associate with Adams’ best music… Its controlled restlessness yields to tremendous fervency, from the ‘ghostly’ elements of the first part to the second, with its ascending lines that rise and shimmer like heat off a highway…Adams at his most gripping, and the St. Lawrence players gave the work a fierce, go-for-broke reading.” Mercury News

And here is a YouTube audio (recorded from the NPR interview with its in-studio broadcast) of the final movement of John Adams' String Quartet with the St. Lawrence Quartet.