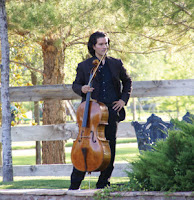 Back in February, one of our more memorable blizzards in years managed to put the kaibosch on the original CD Release Party to celebrate Zuill Bailey's just-then-released Telarc disc of the six Suites for Solo Cello by Johann Sebastian Bach, a major accomplishment in any cellist's repertoire.

The party has been rescheduled for this Wednesday evening, May 5th. The weather promises to be much better - a sunny day with a predicted high of 84°.

The party will be held at the Mid-Town Scholar Book Store at 3rd & Verbeke (a.k.a. Broad) Streets in Harrisburg, across from the Broad Street Farmers Market.

Presented in collaboration with Market Square Concerts and HACC-Midtown, it begins at 6:00 and Zuill will start playing some excerpts from the Bach Suites at 6:30.

A $5 donation is requested. Hors d’oeuvres prepared by HACC’s culinary students and liquid refreshments will be available.

As refreshments for the soul, Zuill will play selections from the Bach Suites. He comes to Harrisburg from other CD release parties in San Francisco and New York, then goes on to Baltimore and other hopefully less snow-challenged locations.

After his November recital here, we're very lucky to have him back in Central Pennsylvania again and especially honored that he chose to have the CD-Party here. His new Bach CD will be available for purchase on the night of the party.

These six suites, some of the most significant repertoire for a cellist, were recorded each in one sitting over a period of one week at the American Academy of Arts and Letters in New York City, following years of preparation by Mr. Bailey. He calls the process of recording these suites “such a personal journey for me.”

Zuill was just here this past November for a program at Whitaker Center with Market Square Concerts: you can read about it here and here.
Posted by Dick Strawser at 11:08 PM No comments: