This Saturday, Market Square Concerts returns to Market Square Presbyterian Church for a program that includes five American composers and works for voice and string quartet. Joining the Lark Quartet - who then style themselves the Lark Quarte+ when adding someone to their programs - will be baritone Stephen Salters.

The program opens with rags by William Bolcom and closes with songs by George Gershwin: in between are three works about identity: the east coast premiere of Bolcom's Billy in the Darbies, as a young man sentenced to death contemplates his life; a work describing an outer-space alien's attempts to figure out what an American is in Theodore Wiprud's American Journal; and a love-story told in music by Elena Ruehr in the best boy-meets-girl/boy-loves-girl/boy-loses-girl tradition except in this case the girl is a silkie, a legendary seal-woman who comes ashore and sheds her seal-skin to fall in love with a man only to return to the sea.

Composer Theodore Wiprud will be attending the concert and speaking to the audience before the performance of his work.

I'll be doing a pre-concert talk beginning at 7:15.Here are my program notes for this concert:

For those of you who enjoy pondering Unanswerable Questions, this program offers you four composers writing in the United States between 1970 and 2010—plus some Gershwin from the ‘20s and ‘30s—that may spark a discussion about “What is an American Composer?”

Is it being born in America, or does it mean writing in an American style – and if so, what does that mean?

Antonin Dvořák, when he taught in New York City, advised students to look to their folk music to find their “natural” voice. But what did that mean, for a nation made up of many cultures? What influences composers in today’s world? How do they make it their own?

Here are a few examples:

Born in Seattle in 1938, William Bolcom began studying composition when he was 11, then with Darius Milhaud and Olivier Messiaen. While studying and working in France and Germany during the 1950s, he composed in the standard serial style du jour influenced by Boulez, Stockhausen and Berio. After returning to the United States in 1962, he found little sympathy for the latest avant-garde techniques from Europe. Eventually, he started exploring a more eclectic approach, developing a love for popular styles that he then sought to integrate into his “serious” music. He has said his main goal was “to erase the boundaries between popular and art music.”

Bolcom’s catalogue ranges from operas like McTeague and A View from the Bridge to cabaret gems like “Lime Jello Marshmallow Cottage Cheese Surprise,” and includes eight symphonies, eleven string quartets and numerous stage works and song cycles. He won the Pulitzer Prize for a set of Twelve New Etudes for piano in 1988. Until he retired in 2008, he taught at the University of Michigan.

In the late-1960s, someone told Bolcom about Scott Joplin’s little-known ragtime music (beyond the “Maple Leaf Rag”), particularly mentioning the unfinished opera, Treemonisha. This whetted his appetite as he began tracking down what music he could find, contacting several friends who, likewise enthusiastic, began recording it. The Joplin Revival was in full “swing.” From the “ragged” rhythmic style of its right-hand melody over a steady stride bass, ragtime originated as a basically honky-tonk keyboard style, a synthesis of African syncopation and American dance-hall tunes descended from European popular music. It influenced several European composers like Eric Satie, Claude Debussy and Igor Stravinsky and was considered by some the American equivalent of Chopin’s mazurkas or Brahms’ Hungarian Dances, stylized evocations of folk or urban popular music.

Bolcom immediately started writing his own rags, looking at them originally as “my mazurkas.” Later, he arranged some of them for various combinations. The first of this set, Poltergeist, contains several unexpected twists, turns and ghoulish special effects – some (we assume) made by the performers. “It was written in a converted garage next to a graveyard in Newburgh, NY,” says the composer Graceful Ghost is one of Bolcom’s best known works, an elegantly melancholy tune full of wistful harmonies, dedicated to his father’s memory.

While the first two are from the 1970 set called “Ghost Rags,” the third one written in 1967, less well-known independently, could serve as a peppy theme song for the City of Harrisburg’s economic revival. It’s called Incineratorag.

While the traditional route for a composer had been to teach in a university music department, Theodore Wiprud, born in Washington DC in 1958, bases himself in New York where he is a composer as well as “concert presenter, educator and musical executive,” working with the New York Philharmonic as Director of Education and bringing music to classrooms and community venues across the city. Following a degree in biochemistry from Harvard even though his lifelong dreams involved music, he had a lucky encounter with composer David del Tredici which led to a Master’s degree in composition in 1983. With several works inspired by Dante’s Divine Comedy, much of his music deals with spiritual experience whether in vocal or instrumental works. His Violin Concerto “Katrina,” premiered last October, was written for Ittai Shapira, familiar to Harrisburg audiences as a member of Concertante.

Robert Hayden (1913-1980), raised in the Detroit ghetto, became our first African-American poet laureate in the late-70s. His American Journal first appeared in 1978. In 2000, Wiprud began collaborating with baritone André Solomon-Glover, the first part ready for performance the following year. But after Solomon-Glover suffered a stroke, the project was put on hold. “I continued writing scenes in between other projects,” Wiprud says, “and finally completed the entire work in the summer of 2007 for a 2008 premiere on Victoria Bond's Cutting Edge Concerts. During these seven years, I have seen the relevance of the poem grow with every day's headlines. What, indeed, is an American?”

Hayden's “American Journal is a remarkable piece of social commentary,” the composer writes, “the alleged journal entries of an extraterrestrial visitor studying America undercover. Full of both wit and a tragic view, the poem raises questions without answering them. The alien’s awkwardness as he tries to fit into American society in various guises suggests a host of interpretations. Where one might find an allegory of race in America, or a Cold War commentary, I also read a reflection on the position of the intellectual. The alien writes, ‘much here is beautiful,’ and ‘i am attracted to the vigorous americans,’ but he is at the same time repelled and frightened, and certainly not accepted. He cannot figure these Americans out, but comes to identify more with them than with the purely rational ‘Counselors.’”

At this performance, we’ll hear a new, compact version utilizing three of the original scenes plus parts of the prologue and epilogue.

Words have been an important part of William Bolcom’s output. He set 45 poems from William Blake’s “Songs of Innocence & Experience,” a vast work for soloists, choruses and orchestra (a recording of the complete cycle won three Grammys in 2006). In addition to the cabaret texts that may be more familiar, he has also set texts by WaltWhitman and turned works by Frank Norris and Arthur Miller into operas.

In one of his most recent works, Bolcom turns to Herman Melville’s unfinished novella, Billy Budd, setting the poem known universally as “Billy in the Darbies,” the starting point for Melville writing the story and then becoming the final chapter of the manuscript.

Billy is an innocent, pressed into service by a British ship during the Napoleonic Wars in 1797, who, though revered by his shipmates, lashes out at the ship’s Master at Arms, John Claggart, and accidentally kills him. Circumstances notwithstanding, Billy is condemned to hang from the yard-arm. The poem, told as a sentimentalized ballad after the fact, describes Billy’s meditations in his cell (“Darbies” is a slang term for handcuffs) before his execution the next morning.

Written for the Lark Quartet and Steven Salters, it received its world premiere at Stanford University on February 12th, 2012.

This performance will be its second performance, the East Coast premiere.

Elena Ruehr, born in 1963 and raised on Michigan’s Upper Peninsula, later studied at the University of Michigan with William Bolcom, then at Juilliard with Vincent Persichetti . She now lives in Boston, teaching at MIT since 1991. Enriching her classical background, she has also played in a gamelan orchestra and studied West African drumming. Opera News described her as “a composer to watch,” her music written “with heart and a forceful sense of character and expression” (The Washington Post). Gramophone magazine called her music “unspeakably gorgeous.” She has written six string quartets, three of them commissioned by the Cypress Quartet who will be performing her 5th Quartet, “Bel Canto,” inspired by Ann Patchett’s novel, when they perform with Market Square Concerts two months from now.

The Song of the Silkie, setting a text by playwright Laura Harrington, was commissioned by the Rockport Chamber Music Festival and premiered in 2000. Ruehr was asked to write a piece about the sea and chose a story that stems from the same branch of folk legends that have given us water sprites like Undine and Melusina or Anderson’s Little Mermaid. In Celtic versions of this story, a “silkie” is a female seal who comes ashore and sheds her skin to become a woman in order to mate with a human male. After she resumes her sealness, she returns to the sea and the bereft man is left to hunt the seas to find his wife. The poem is a dialogue between the man James and the silkie, named Sula—the baritone sings both parts, taking the role of the silkie into a higher, falsetto range.

As blogger Tom Schnauber of the Boston Musical Intelligencer described it, “Darkly shimmering, watery textures alternate with jig- and reel-like rhythms turned inside out to create a half-moonlit-shanty effect that the Quartet vividly brought to life. These textures support the daring vocal part that serves as the expressive core of the piece.” 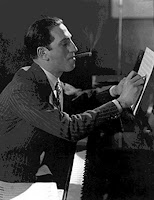 George Gershwin, an iconic American voice, is often considered the quintessential cross-over composer, beginning in the realm of popular music in the age of Tin Pan Alley and almost by accident discovering the world of classical concert music when Paul Whiteman asked him to write something for piano and jazz band that became Rhapsody in Blue. It is unfortunate he did not live long enough to write more than a few pieces for the concert stage and the opera, Porgy & Bess.

From over a dozen musicals written for Broadway, many of them collaborations with his older brother, Ira, came numerous popular songs which can be found in numerous adaptations. “Strike Up the Band” was part of the 1927 musical in which a war-loving USA declares war on Switzerland. The show failed but the song eventually became a hit on its own. “Embraceable You” was written for an unpublished operetta, East Is West, in 1928, then incorporated into Girl Crazy in 1930 where it became a dance number for Ginger Rogers and Fred Astaire. “It Ain’t Necessarily So” is the drug dealer Sportin’ Life’s cynical biblical summary told at the church picnic in the 1935 opera, Porgy & Bess.

I should mention the title of this last song could also be a response to any answer to that initial question, “What Is an American composer?”