Calefax Is Coming to Town!

While it looks like we'll be back in the Deep Freeze this week – at least (knock on plastic laminated, artificial wood substitute) no snow storms in the immediate forecast – here's a performance that will warm your heart and soul with some great music on the next program from Market Square Concerts, Thursday night at 8pm at Temple Ohev Sholom in uptown Harrisburg.

Calefax will be performing Ravel's Tombeau de Couperin and Bach's Goldberg Variations which might make you think Mr. Calefax is a pianist.

Not quite. Calefax is a “reed quintet” that is not your standard woodwind quintet – in fact, it consists of an oboist, a clarinetist, a saxophonist, a bass clarinetist and a bassoonist. 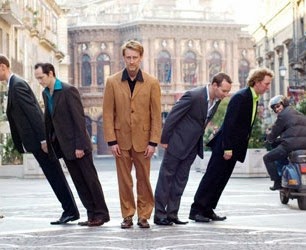 So let's begin with the Janáček, a very early work and one of his few solo piano pieces. It's a short set of variations written for a young student of his – he would marry her the following year but unfortunately it was not one of those happily-ever-after marriages. But let's leave the future out of it as we listen to this delightful work written in 1880, the year after Brahms premiered his brand new Violin Concerto. And while they may sound thoroughly conventional (more like Schumann with a dash of Smetana) compared to the original voice we'd know from his later works (much of it written after what we consider “retirement age”), Janáček was 25 when he wrote this. It's his Opus 1, his very first published piece.

Ravel wrote a suite of pieces for piano that, on the outside, celebrate an earlier century of French culture – the great Baroque master François Couperin. He would later orchestrate them himself – so Calefax's treatment of this piano piece is not entire unprecedented – and reveal a hidden subtext.

He began composing them in 1914 though they weren't completed until three years later. The word tombeau is not so much a tombstone as it is a memorial and if we recognize the dates of its compositions from our history lessons, you'll understand his selection of the word.

Ravel was too short and light-weight (as well as too old and in weak health) to enlist in the French army (he wanted to become an aviator) at the outset of what became World War I in 1914. Eventually, he served as an ambulance driver at the Verdun front in 1916. At 11 months, it was one of the longest battles in human history, with an estimated 970,000 casualties on both sides.

While it is impossible to imagine the horrors of this experience against the music you will hear, Ravel noted that each movement was dedicated to the memory of his friends killed in the war – for instance, the lively Rigaudon to a pair of brothers killed in November by the same bomb.
= = = = =

On the outside, a tribute to the French baroque keyboard suite – on the inside, something much deeper - and darker.

The program opens with Bach's Goldberg Variations, a monumental work that usually closes a concert. It's a set of 30 variations that opens and closes with a gorgeous, slow “Aria” fore and aft. Here are two very different interpretations of the Aria:

In Bach's day, most works for keyboard were generically for any keyboard instrument – from the “desk-top” clavichord to various types and sizes of harpsichords and even forerunners of the piano as well as the organ – but Bach composed this set of variations specifically for a harpsichord with two manuals.

So, playing it on a piano is already one form of translation, given the differences in touch, pedaling and of course instrumental color between the instruments. Turning it into a work for five wind instruments is only taking it another step further.

Here are some of those “graphical scores” that might help you visualize how a piece written for keyboard can have different “voices.” This is “counterpoint” made visible. Remember, too, that what is varied here is not the melody (the usual theme) but the bass-line you heard in the Aria over which that beautiful melody flows.

The left and right hand nature of the first variation specifically requires two manuals on the harpsichord: notice how at times they cross over each other.

Here's the first of the canons, Variation #3. Notice how the different melodic lines, represented in different colors, move independently: the canon (the same line played in a second voice at a slight delay) is between the brown line and the green one. Transferring these lines into individual wind instruments is a logical progression.

Here's the 22nd Variation – again, notice how the lines move independently. This is definition of counterpoint and, in this case, move “in imitation.”

The final variation (before the aria returns to conclude the set) is a “quodlibet” (literally, “what you will”) which combines fragments of a number of popular songs of the day playing against each other, all over the “bass-line” that unites the entire set of variations. It sounds simple enough to write – trust me, it's not!

How does this translate for a quintet of reed instruments like Calefax? Here's a brief promo from their recording of the Goldberg Variations with the "Quodlibet":

Here's a preview of a performance they've given with dancers – remember that the initial reason Bach was supposedly asked to write this piece was to help a friend through long sleepless nights – but notice that the instrumentalists, aside from wearing red pajamas, are also playing from memory!

You can also listen to the podcast that Cary Burkett produced which aired on WITF-FM last week and read Ellen Hughes' article in the Patriot-News about the impending arrival of Calefax this Thursday evening at 8pm at Temple Ohev Sholom on the southeast side of N. Front Street & Seneca Streets in uptown Harrisburg.

Posted by Dick Strawser at 12:33 PM No comments: