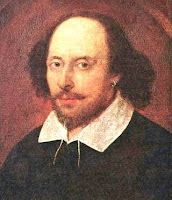 Join us for the last concert of the season as Parthenia presents a program of music and poetry from the days of William Shakespeare. The performance will be held Saturday, April 24th, at 8pm in Harrisburg's Market Square Church.

"Parthenia, hailed by the New Yorker as 'one of the brightest lights in New York's early-music scene,' is a dynamic quartet exploring music from Tudor England to the court of Versailles and beyond. Known for its remarkable sense of ensemble, Parthenia has been presented in concerts across America and produces its own lively and distinguished concert series in New York City.

In the Elizabethan world, poetry and music were inseparable; poetry was conceived as song and music took its forms and phrasing from poetry. In Parthenia’s concert, dramatic readings of the poetry of Shakespeare and Donne are interspersed with instrumental and vocal musical vignettes.

In addition to her work as a member of the world famous vocal quartet Anonymous4, mezzo-soprano Jacqueline Horner-Kwiatek has a reputation as a versatile and accomplished soloist. Paul Hecht made his Broadway debut in 1968 and has had a varied and successful acting career in theatre, film and television, including “Kate and Allie” and “Law and Order.”

Here's the program for their concert on April 24th... Notice that it's a short but very sweet program on what is believed to be the day after Shakespeare's actual birthday. I hope you find the prospect of hearing words and music from Elizabethan times as exciting as I do."

When Music and Sweet Poetry Agree
Shakespeare, Donne and their Elizabethan musical contemporaries
(This program will be performed without intermission)

The Relic - by Donne
Harke, Harke - by Tobias Hume
Death be not proud - by Donne
Hugh Ashton’s Maske - by Hugh Ashton, attrib. (c.1485-c.1558)
Sonnet XXIX: When in disgrace with Fortune and men’s eyes - by Shakespeare
Now, oh now I needs must part - by Dowland
Sonnet LXXI: No longer mourn for me when I am dead - by Shakepeare
Pavan: Paradiso - by Holborne
The Valediction: Forbidding Mourning - by Donne
Posted by Dick Strawser at 3:45 PM No comments:

This afternoon, the winners of the 2010 Pulitzer Prizes were announced. The winner of the Music Prize is Jennifer Higdon, receiving the award for her Violin Concerto, composed for Hilary Hahn and premiered by her in February 2009.

You can read the announcement as it was posted at The New Music Box where I found it through Facebook.

You can also read her own response to winning a Pulitzer, here, also posted at the New Music Box.

I've also posted more about the Violin Concerto on my blog, Thoughts on a Train, including some comments I'd jotted down while listening to the on-line broadcast of the concerto last June.

This past January, audiences in Harrisburg got to hear two works by Jennifer Higdon. With Market Square Concerts, the Cypress Quartet performed "Impressions," a string quartet that Higdon composed for them. Ms. Higdon was here to talk about the piece before the performance and to meet the audience.

The following week, the Harrisburg Symphony performed the opening movement of "CityScape," a lively overture called 'SkyLine.' In previous seasons, they also performed the Percussion Concerto (a work that won her a Grammy earlier this year) and one of the most frequently performed new orchestral works in the United States in recent years, her Blue Cathedral.

Congratulations to Jennifer Higdon on her Pulitzer Prize!

A Picnic Concert (of sorts) in Reading

Every now and then, I like to pass along some concert info about performers who've appeared recently with Market Square Concerts who are performing elsewhere in the area.

Matthew Bengtson, a Philadelphia-based pianist and harpsichordist who played Bach's Goldberg Variations and several contemporary works (including some by Elliott Carter and Jeremy Gill) for Market Square Concerts in January of 2009, will be performing a harpsichord concerto by Francis Poulenc with the Reading Symphony conducted by Andrew Constantine this Saturday evening, April 10th, at 8:00 in Reading's Sovereign Performing Arts Center. 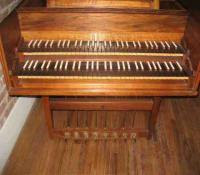 As Matt explains, Poulenc's concerto “requires a harpsichord in the early 20th century style. I will be playing a William Dowd harpsichord (see left) [that is] the largest Dowd ever built, with eight pedals enabling rapid changes of timbral registration. This instrument formerly belonged to Rosalyn Tureck,” one of the great American harpsichordists of the previous generation.

Francis Poulenc wrote his Concert champêtre in the late-1920s, its title redolent of a rustic picnic in the French countryside, though the composer admits the most 'rustic' he ever got would be considered 'suburban' today. He wrote the work for Wanda Landowska, the great Polish harpsichordist who is credited with bringing the instrument back into modern awareness with her performances in the early decades of the last century, and she gave the concerto its world premiere in 1929.

It's composed in an appropriate mix of styles more native to the instrument's baroque and classical heritage with a touch of 20th Century harmonic spice: at one point, Poulenc may evoke the sounds of the great French keyboard works of Rameau or Couperin, a delicious sicilienne of Italian vintage and a headlong romp straight out of Handel's “Harmonious Blacksmith” (you can hear the final movement here, with Aimee van de Wiele, the Orchestre de la Societe des Concerts du Conservatoire conducted by Georges Prêtre.)

Reading's whole season is a musical journey and even though the first half of this concert is a leisurely stop in France, the main destination is Germany for Beethoven's 7th Symphony.

Soon, I'll be telling you about the last program in Market Square Concerts' current season with music and poetry from the time of Shakespeare – in fact, it's even on Shakespeare's birthday, April 24th.

Join us that evening at Market Square Church as actor Paul Hecht and soprano Jaqueline Horner-Kwiatek (one of the original voices of Anonymous4) join Parthenia, one of the bright lights of New York City's early-music scene.

Also, don't forget, looking ahead to next month, that Zuill Bailey's “CD Release Party” for the Bach Cello Suites has been rescheduled from February's blizzard to May 5th at 6pm at the Midtown Scholars Bookstore on 3rd at Broad Street. Chances are pretty good the weather's bound to be better!

Also, dates are up for SummerMusic2010 – so reserve July 21, 24th and 25th for some great summertime chamber-music-making.

- - - - -
photo credits: 'relaxed' portrait of Mr. Bengtson by David Aretz, from the performer's website; of the Dowd harpsichord, supplied by Mr. Bengtson.
Posted by Dick Strawser at 3:08 PM No comments: