Gabriel Fauré and the Perseverance to Find the Perfect Ending

“After revisiting a set of variations by Sergei Taneyev last week, this week’s dose of great music features two movements from the Piano Quartet in C Minor by Gabriel Fauré who was Taneyev’s close friend and duet partner. From the somber opening of the contemplative slow movement to the triumphant ending of the stormy finale, this piece is full of beguiling surprises and contrasting moods. Enjoy!” – Peter Sirotin, Artistic Director of Market Square Concerts. 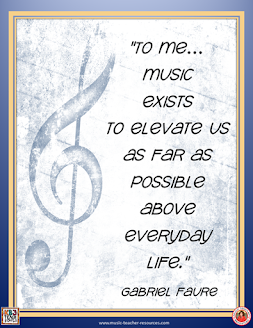 When Gabriel Fauré wrote his 1st Piano Quartet, it took him over two years to finish it. But even then, three years after it was premiered, still dissatisfied with the original finale, he wrote a whole new last movement.

As we deal with the uncertain times we're living through, wondering when we'll all get back together to hear live music again and we want it all to happen NOW, remember even the music you might be listening to wasn't always done effortlessly in a short period of time. In Fauré's case, it took considerable patience and perseverance to make it come out right and find what it was he was looking for.

Fauré was in his early-30s when he began his first piano quartet in 1876, though he didn't finish it until 1879. After it was premiered the following year, he revised it and wrote a completely new last movement in 1883. The quartet is in the traditional four movements with a brief scherzo in second place rather than the usual third. Today's dose includes the slow movement, Adagio, and the “new” finale.

The slow movement has been described as “majestic and profound,” serene, poignant – dark – not unlike a pavane (a slow, stately dance in duple time from the medieval era, or at least as it was thought to be in late-19th Century). Contrast (at 2:11) comes with the nostalgic dream-like (song-like) middle section when, as if the dreamer awakens surrounded by this sense of sadness (at 4:49) the opening theme returns (or more likely resumes) but accompanied by the arpeggios of the contrasting theme still in the piano until it wears itself out by 7:30.

Whatever the original finale was like and for whatever reasons it left the composer disatisfied, the new finale begins out of this dark C minor cadence, the piano setting up a moto perpetuo under a motive in the strings clearly drawn from the slow movement's main theme. One can psychoanalyze this in so many ways: turning grief into moving forward? Without any specific explanation from the composer, it is our interpretation which might say more about our state of mind than the composer's. Stylistically, it is the chord sequence (blocked chords beginning with the viola melody) at 8:47 that strikes us (at least the listener in 1884) with something new: the first movement started out fairly conventionally, in terms of its harmony, but through the slow movement especially he began to prefer certain types of chord movement which were slightly different and less typical.

It is these sounds which strike the modern listener as “essentially French,” emerging from the shade of Cesar Franck (who composed his Piano Quintet in 1879) and pointing the way toward Debussy (whose first compositions started to appear in the early-1880s; he was still a conservatory student in 1884) and to Ravel (Fauré's own student, eventually, who'd begun composing around 1890 and who would later dedicate his 1905 String Quartet to Fauré, his teacher and mentor).

The “status quo” returns with the real second theme (at 9:36) with a few harmonic slips into raised-eyebrow territory for the more conservative listeners at the time At 10:40, the opening theme's motive appears against the “metric uncertainty” of the piano (another example of “hemiola”) which seems to be moving in an almost different (slower) tempo, like a reflection. Then (at 12:14) the opening theme comes galloping back in in the piano (the strings continue the slower layer of the contrasting chords) then building harmonic tension (especially through a prolonged, unstable augmented chord) which (at 12:50) brings us back to a full statement of the opening theme (resolution!). This then, sounding like the expected Recapitulation, is stopped short by an unexpected and prolonged piano chord (around 14:08) before switching (still unexpectedly) into a fluttering passage with elements of both the first and second themes intermixed or superimposed.

Eventually, we end up (expectedly) in C Major for what is ultimately a triumphant conclusion – C Minor is often considered a dark and tragic key; C Major, by contrast, the brightest, most triumphant of keys (just ask Beethoven's 5th or Brahms' 1st Symphonies) – one that is as full of energy as any German composer's finale.

If you want to read more about Fauré's life and the music he wrote in his long and inspiring career – and look at some “visuals” about some Romantic and Impressionist art and find out more about this distinction of all this "German" and "French" stuff – check out the original post. Just scroll down past the second set of asterisks.

Posted by Dick Strawser at 8:08 PM