A Weekend with Cuarteto Latinoamericano, Part 1: A Chance to Travel without Walls and Travel Bans - First Stop, Brazil 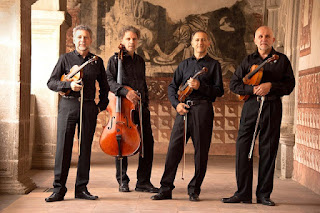 You don't need to be fluent in Spanish to understand the name chosen by Cuarteto Latinoamericano. Founded by three Chilean-born brothers and a friendly violist in Mexico City in 1982, the quartet consists of 1st Violinist Saúl Bitrán, 2nd Violinist Arón Bitrán, Cellist Álvaro Bitrán, and Violist Javier Montiel. Starting off with the usual repertoire of Beethoven, Mozart, Brahms and the like, they've gone on to become internationally famous as exponents of music by Latin American composers.

Their program with Market Square Concerts this Sunday at Whitaker Center brings quartets by well-known composers like Heitor Villa-Lobos from Brazil and Alberto Ginastera from Argentina, as well as a popular dance by perhaps the most recognizable name among Argentine composers, Astor Piazzolla (if Johann Strauss, Jr., is known as the Waltz King because of his specialty, certainly Piazzolla is the Tango King).

To this, add one of the most popular Mexican songs, “Estrellita” by Manuel Ponce, and a newer composer, Gabriela Ortiz who was born in Mexico City in 1964 and grew up in a family of folk musicians. Her own musical style incorporates traditional classical styles interspersed with rock, African and Afro-Cuban influences as well as the world of “electro-acoustics.”

You can read the second half of this post - about the Mexican and Argentinian part of the program - here.

As many of you are aware of – every time you put on your mask and step outside into the real world – 2020 has been a year unlike any of us imagined possible. And while it has severely impacted our opportunities to eat at a restaurant or attend a live concert, even the idea of going shopping for groceries or traveling or sending the kids to school – or vote in an election – is nothing like what we used to call “normal.”

And so our programs at Market Square Concerts, like every other concert-giving organization, has had to learn how to be flexible.

If you remember back what seems like a few years when we announced the new season, the November concert featured guitarist Jiji along with the Cuarteto Latinoamericano in a program that included the famous Quintet for Guitar and Strings by Luigi Boccherini. But Jiji who teaches at the Arizona State University was unable to perform because of the university's general out-of-state travel ban due to the Pandemic.

The quartet, however, was able to fill out the program on their own – not a problem, given the scope of their repertoire – and since they are currently in residence in Boston, they can drive to Harrisburg and remain safe in the process.

However, their original violist will be unable to attend and so Carlos Boltes will substitute for him. But he has played with them so often, he's practically one of the band already, so it's not like he's some free-lancer sitting there trying to figure out how to fit in with three brothers who've been playing together all their collective lives.

And so, our first stop - Brazil.

The opening work on the program is the String Quartet No. 5 by Heitor Villa-Lobos. Here's a video with Cuarteto Latinoamericano that might prove a bit distracting if you pay too much attention to the setting. I should also mention one other thing you might overlook with that: they're all playing from memory.

(This video was recorded at Las Pozas in Mexico, a collection of architectural sculptures in an Eden-like rain-forest. Another video, with the score for those of you who want to follow along, also uses the Cuarteto's recording.)


Written in 1931 when he was in his mid-40s, Villa-Lobos' 5th Quartet, unusual among his 17 quartets for using genuine folk material, is subtitled "Quarteto popular," referring to his use of actual popular Brazilian melodies incorporated into the work's traditional texture and structure. Later in his life, Villa-Lobos himself (quoted in a 1991 article) considered this quartet one of his weaker compositions. If, like me, you find yourself enjoying it on first (or tenth) hearing, the composer's own attitude might come as a surprise. Though undated, as far as I can tell, it's probably from a period in the late-1950s following a resurgence of his international fame following this period of “nationalist isolation” in the 1930s-to-mid-1940s (but I'll get to that in a minute).

The tempo of the first movement, marked Poco Andantino, changes frequently, ranging from Lento to Presto. The impression is one of a kaleidoscopic patchwork of tunes in delightful settings. This is often the case in works based on popular melodies or folk tunes which defy the classical traditions of development. Rather than consider it a weakness (because it's not one thing), you should just take it for what it is (another).

In the third movement, a unison theme suggests Indian music, but the fourth, in a steady Allegro, uses a series of children's tunes from his collection, Guia prático, including "O Bastão ou mia gato" (The Stick or a Cat's Meow), played in harmonics in all four instruments.

In the United States, Heitor Villa-Lobos is remembered primarily as the creator of an authentic Brazilian Voice in Classical Music, blending a European colonial heritage (like the USA which speaks English, Brazil speaks Portuguese) with indigenous folk music as well as the imported European-based folk music, European classical music of the upper classes and the local popular music that grew out of “all-of-the-above.”

He also composed between 1930 and 1945 nine pieces he called Bachianas Brasileiras (Bach-inspired Brazilian pieces), adding to his inspirational sources his love of Bach. The most famous, No. 5 with its soprano and eight cellos, was written originally in 1938. But he'd already incorporated neoclassicism (the early-20th Century retrospective on music from the 18th Century) by 1913, before it became popular in Paris with Poulenc and his friends in Les Six. Yet it was the result of his exposure to the amazing world of 1920s Paris (Roaring, indeed) that inspired him anew.

Around 1918, coincidentally the end of World War I, Villa-Lobos decided to liberate his style from European romantic traditions and began listening more to the music around him. A string quartet intended to reflect Brazilian urban life did not fare well at a 1922 festival of new music in São Paolo. The great pianist Artur Rubinstein played Villa-Lobos' 1918 suite A prole do bebê (“The Baby's Family,” inspired by a collection of dolls) and while today we know it only through its brilliant toccata-like finale, Polichinelle, one of Rubinstein's favorite encores, the music was apparently too intellectual for the audience and was booed. As he told Rubinstein, “I'm still too good for them.” Perhaps, with a title like that, they were expecting a remake of Debussy's Golliwog's Cakewalk?

Anyway, Rubinstein suggested he go to Paris, the current hot-spot for modern art following the War. He had made two extended visits to Paris in the mid-to-late-1920s, intended to stay there, renting an apartment in the famous Latin Quarter. But in 1930, he returned to Brazil to conduct some concerts before returning to Paris. Unfortunately (or not), the timing was not good.

And this is where Art and Politics collide.

This post is not the place to get into the details of such a complicated history nor do I want to get into political arguments and what it meant that Villa-Lobos was an artistic supporter of the ideals of the Revolution and its charismatic leader who became a dictator similar in his own ways with the Fascists of Germany and Italy. I point this out only because too many Americans listen to music as if it were created in a complete vacuum and that whatever reality the artist was living in and creating in has no bearing on Art.

What is generally called Brazil's “Old Republic” was sinking into turmoil, with no help from the worldwide Great Depression of 1929. The economic chaos it created was not just something which made life difficult in America and which factored heavily in the rise of European Fascists like Hitler and Mussolini. With the start of a grass-roots revolution led by Gen. Getúlio Vargas the following year that eventually brought down Brazil's government, the Revolution of 1930 meant money could no longer be taken out of the country, and so Villa-Lobos had no means of traveling abroad much less paying rent in Paris.

Forced to stay in Brazil, he arranged concerts instead around São Paulo, and composed patriotic and educational music. Involved with Vargas' educational reforms at the “Superintendancy for Musical and Artistic Education,” or SEMA – he became director in 1932 – his duties included arranging concerts like the Brazilian premieres of Beethoven's Missa Solemnis and Bach's B Minor Mass as well as various Brazilian compositions. Villa-Lobos participated fully in the re-invention of Brazil's music education and created massed choral patriotic spectacles that today we would consider “propaganda.”

His involvement with SEMA led him to compose mainly patriotic and propagandist works but Villa-Lobos also composed five string quartets – Nos 5 through 9 – which explored the possibilities his “public music” opened up and now dominated his output. It is important to note that because of the political situation in Brazil as well as World War II in Europe, Villa-Lobos was unable to travel until after President Vargas was overthrown in 1945. However, his political support and involvement in propaganda music for Vargas' initially benign regime damaged his reputation among younger composers looking for a more universal musical style after the War. Still, his “liberation” of Brazilian music from a kind of European musical colonialism is an important aspect of his legacy.

Almost immediately after the fall of the Vargas regime, Villa-Lobos returned to the international scene and was recognized as a leading composer with numerous commissions, not all of which were well received. His last completed string quartet, his 17th, was ready in 1957 but premiered in Washington DC only two years later. The composer died a month later without knowing it had ever been performed.


One of his last projects was a 1959 film score for Hollywood, the movie Green Mansions starring Audrey Hepburn as a girl from the jungles of South America who falls in love with a Venezuelan adventurer played by Anthony Perkins (who, the following year, would star in Psycho). Unfortunately, after Villa-Lobos composed and conducted the recording of the complete film score, most of it ended up on the cutting-room floor and someone else was brought in to provide more "suitable" music. The movie was also one of the few flops in Hepburn's career, but that's another story.